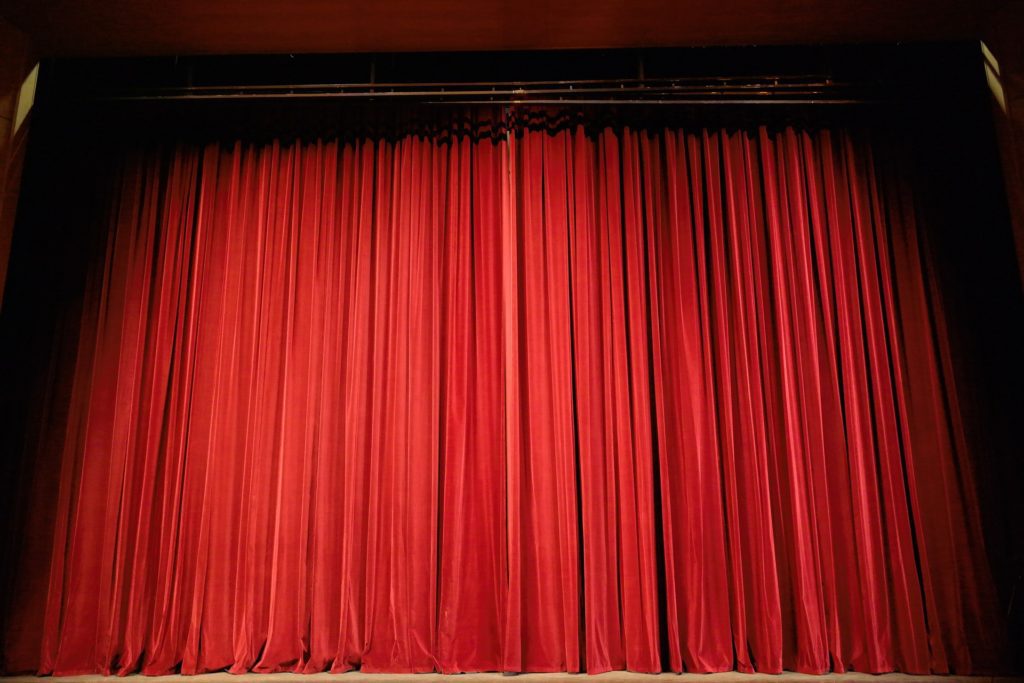 When you go to a traditional theatre to watch a performance, there are certain things you expect to see around you, like plush tiered seating, lighting rigs, an orchestra pit and – of course – theatre curtain and stage drapes across the front of the stage

Over the years, as the theatre scene has changed and spilled out beyond the conventional theatre and into less equipped spaces such as schools and studios, stage curtains have needed to become something more adaptable and flexible. They’re quite often incorporated into the performance itself to contribute towards the atmosphere and experience of the show for the audience- whether that’s a painted backdrop that adds to the scenery or a star-cloth used to set the mood for a dynamic night-time scene.

But – as with most things in the stage engineering and installation world – there are a lot of terms out there to describe the different types of curtain available, and quite often it can get confusing. So, we thought we’d put together this handy guide to stage and studio drapes to explain some of the basic types of theatre curtains available and how they work.

The front curtain (also known as front tabs) hang at the very front of the stage behind the proscenium arch and is usually made from a heavy coloured fabric. The front curtain is usually opened just before the show begins, then closed at the end, separating the audience from the stage and hiding the set from view.

Depending on the theatre, the front curtain can be made up of one or two sections, and either open and close horizontally across the stage, or be hoisted upwards to the ceiling area known as the ‘fly space’.

A scrim can be great for creating atmosphere or staging the otherwise difficult scenes in shows. It’s made up of weaved, gauze-like fabric that is opaque when lit from the front but becomes transparent when lit from behind.

Scrims are great if you want to create depth to your work. You could use one in several ways, such as presenting events taking place behind the scrim as memories or dreams by playing about with lighting and dry ice to create an atmospheric effect.

A backdrop hangs at the back of the stage and can be painted as part of the scenery. It can be used to add life-like detail to your set- by painting buildings and stalls in the background if you want to create a bustling market scene, for example.

A cyclorama is a large, flat cloth, often hung at the back of the stage. You can use lighting and projection to incorporate these as part of your scenery, for example using a gobo to create a tree effect or lighting it to represent the sky.

For a simpler set up, leave the Cyc blank and just use side lighting and colour changes to really enhance what is going on onstage- great for something like emphasising movement and style in a dance show.

The bread and butter of stage design- tabs, borders and legs are all vital in a traditional stage set up.

Legs: Legs are tall, narrow drapes on either side of the stage that are used to mask movement and equipment in the wings. Actors waiting to go on stage can stand in the wings without being seen by the audience because of the way the legs are positioned.

Borders: Borders hang down horizontally from the top of the stage to hide rigging and other equipment in the ceiling.

Here at Stage & Studio Projects, we design and install track systems and theatrical drapes as well as star cloths and curtains for broadcast studios so, as usual, if you’re after advice or want to discuss a project, feel free to give us a call and we’ll be happy to help.